A downloadable game for Windows

You are the commander of a submarine under attack. She's taken some damage and now the lights are out and your commanding officers are unconscious. You must navigate between the control stations on the bridge and fend off your enemy. The automatic pressure release has been damaged in the blast, don't let the sub implode!

The bridge has 3 control stations: the sonar, torpedo reload and pressure release.

When sat at the sonar controls you can rotate the sub to line up an enemy in your sights. The sonar will bleep faster the closer you are to hitting them. When it's bleeping constantly you've got one lined up! Fire when ready. And be quick about it, if there are enemies on your radar it's only a matter of time until they find you! A klaxon will sound whenever a new enemy is within range.

The torpedo reload station will start beeping when there's no torpedo in the tube. Flip the switch to load in another one. There can only be one torpedo loaded at a time, so once you fire one from the sonar controls you're going to have to get up and reload before you can fire again.

When the pressure starts building to dangerous levels the alarm on the pressure release valve will start sounding. Get there quick and release the pressure before the sub implodes!

If you're having trouble finding your way around, pay attention to the different sounds and how they get louder and quieter as you get closer and further away. If you're still struggling you can cheat and look at map.txt to see where everything on the bridge is.

Arrow keys up and down to move forward and backward on the bridge.
Arrow keys left and right to turn in 90 degree increments.
Spacebar to interact with a control panel when stood in front of it.

Sonar
When sat at the sonar controls, the left and right arrow keys now rotate the sub.
Press the 'F' key to fire off a torpedo.
Press the spacebar to stand back up and walk around the bridge.

Press Escape to close the game.
Press 'I' to bring up instructions in-game for a reminder of the controls.

For debugging/testing purposes you can also press 'E' to spawn an enemy and 'S' to sink the sub. Press 'S' while the sinking cutscene is playing in order to skip it. 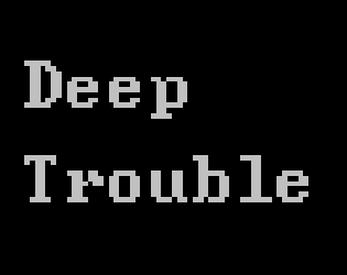