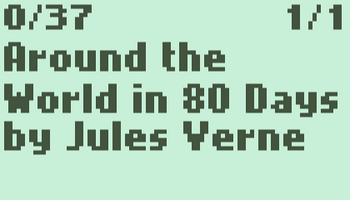 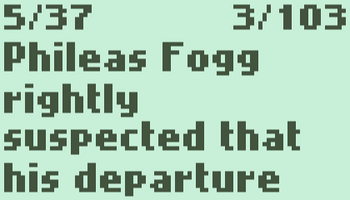 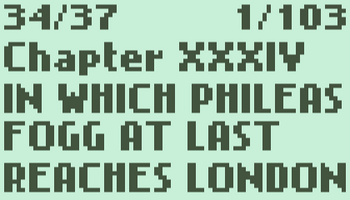 I realised that the most nostalgic part of the Nokia 3310 for me was the font, but I didn't want to try and write something, so I thought of public domain books. It was very amusing trying to design good UX for what was knowingly a terrible form factor. It was also quite satisfying to implement. I had fun :)

I built the game in Unity and relied heavily on the 'page' wrapping mode provided by TextMeshPro. Once I had setup the UI, TMPro could handle splitting the text up into screen-sized pages of text for me. I still had to supply it with the text to chunk though, and found that just sticking a whole book's worth of text into a single TMPro element caused both the Editor and the game to lag tremendously. There were also many characters included in the book texts which weren't renderable by the Nokia 3310 font.

I decided to split each book into separate text files for each chapter, as those were small enough chunks for TMPro to split into pages without lagging, and it provided a simple way to handle chapter-by-chapter navigation. In the inspector for the book menu script, for each book I list the title, author, name of a Resources folder, and number of chapters. This becomes an option in the book selection menu, and opening a book simply involves loading the 0.txt file in the indicated Resources subfolder.

My editing process changed over time as I improved various aspects, but the final process for adding a new book to the game was along the following lines:

The worst way to read books