I said I’ll write at least one more devlog about why the game took so long to make. I still want to do that, but first I thought it would be fun to look back through all the previous devlogs, and to talk about how the launch went.

That price point is certainly too low even for mobile platforms. And of course I didn’t end up releasing natively on mobile, or anything close to 2018.

Everything here is still accurate! The only differences are that some of the visuals and player movement are different to what is visible in the GIFs. For example ink is more purple than black for improved visibility, and the hook automatically stops reeling in after dropping a creature.

I still don’t use text to explain any mechanics, I’m proud of that. The only addition I made is that in Level 1 there is now a dashed line surrounding the fish and the count showing how many you have to catch, because a lot of players didn’t notice the count, which is a key puzzle hint in many levels.

There are 6 main screens in Hook: the title screen, level select, gameplay, aquarium, settings and about. Each of these is a separate .collection file in Defold with an additional main.collection acting as the bootstrapper that loads and enables/disables all the others.

For localization purposes there are different settings screen and title screen collections for each language (settings_english.collection, title_french.collection etc.)

Incorrect! I changed it to a single collection per screen, with the text elements changed and moved around for each language. This is explained in detail in devlog 12.

The state controller, collection proxy loading, level previews and level loading all still work exactly the same as detailed. The only other difference is in the possible transitions.

Completing the final level shows a game completion animation and then automatically transitions to the credits, so that is another transition. The updated transition diagram (with updated screenshots) is: 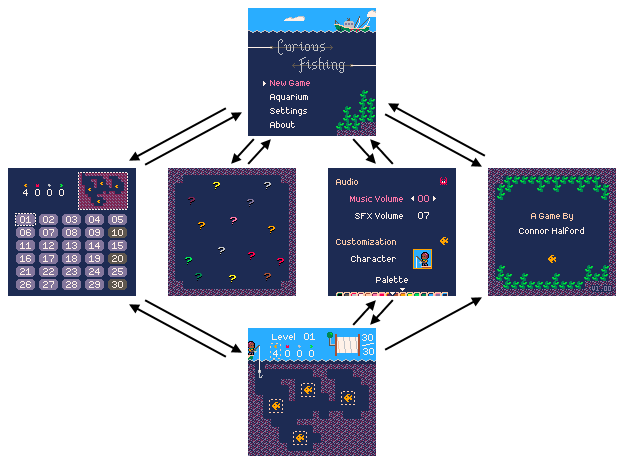 This is all still accurate. The only change to the case is that there are no longer individual arrow buttons in portrait mode, it’s always a d-pad.

Fun fact: I can fit every single texture in the project, including every bit of baked localization text in all 12 languages, into a single 2048x1024 texture with about a fifth still empty.

I actually have no idea what images I included here back then, but that’s actually a much larger atlas. I can fit every single texture in the project into a single 1024x512 atlas with a quarter still empty! If I add margins, internal padding and border extrusion it still easily fits in 1024x1024 :)

consists of around 5500 lines of Lua spread across 31 .script files and 1 .render_script

That file count is still accurate, but the line count in the final build is 9785 lines of code!

gameplay_events.script now handles 23 different kinds of event, but most of the additions were for the ‘flow’ mechanic which wasn’t used in the final game.

Judging by this track record I’m due to change something about the movement around October 2019, then January 2020

This was a joke, but I did actually make one minor tweak and a couple of bug fixes to player movement in 2022. The minor tweak was that when you press a directional input to stop yourself reeling in with nothing hooked (‘version 3’ in the devlog), it no longer actually moves in that direction, the input just causes the reel-in to stop. This was because I noticed that almost every time I used this mechanic, the random directional input was meant as a brake, and it was rarely possible to time an intended direction. The bug fixes were to fix rapid movement when holding multiple directional inputs, and to allow backstepping when the line is fully extended.

The entire flow mechanic was cut! Still happy with the sprite though. I also returned from Aseprite to the simpler and more familiar PaintDotNet.

Andrew now works as a Sound Designer at Jagex, working on Runescape and other projects! Very happy for him :)

there are 18 sound effects in the game

We now have a massive 19 sound effects :)

One thing I really like is that there’s now two versions of the menu music, one for the surface with wave crashing sounds in the background, and a more muted underwater version. Whenever the menu music is playing, both tracks are played together in sync and the relative volumes are blended between 0 and 1 based on the camera position. It’s subtle but really adds to the feeling of dipping underwater.

the content of my project amounts to ~3.8MB of the build, with audio being ~3.3MB of that

For the final HTML5 build the project content is ~4.87MB, with audio being ~4.57MB of that (~94%). The increased size is mainly due to the additional version of the menu music.

Notion remained an invaluable organizational tool for this project for both task tracking and long-form writing. Labelling task tickets by one or more disciplines (code, art, design, audio and admin) also continued to be useful.

The original column structure (Shelved, Bugs, Long term, Short term, In Progress, Done) worked well for the long-duration period of development but during the final launch push I found it useful to reconfigure slightly (Done, Long-running / long-term, In Progress, Features, Bugs, Tweaks, Shelved). I also did another massive cull. The Features, Bugs and Tweaks columns are all now empty, with just a handful of things like this devlog remaining in the In Progress or Long-running columns.

There are 108 tickets in the Done column and 55 in Shelved, although this is a little misleading because:

Setting up access to Notion for Andrew ended up being not worthwhile, because it was so rare for him to have a meaningful amount of work to do. Instead I stopped pestering him, then in an email thread detailed all the audio work as part of the final launch push. He would send me the audio, and I’d implement it and send him a build.

I thought this would be recent enough to still be fully accurate, but there is one very minor change:

The clouds and creatures are usually randomised, but I used a fixed seed here so it was the same in each language

I released Curious Fishing 30 days ago. How did it do? (Technically today is day 30 so there will be a few more hits in the remainder of the day, but you get the idea).

I’m still very happy with the game and stand by my decision to release it as a free HTML5 game and not deal with the stresses of forming a company and filing taxes. I also stand by the idea of launching the game as a premium download on some platforms in the future, once I have other wares to sell too and the enterprise is worthwhile overall. I’m proud of the design and the quality, and I’ve not had to release an update to fix any issues.

This is one or two orders of magnitude more plays than any of my previous personal projects, way more than I expected. I’m very very happy with the reception to the game, that this many people have played and enjoyed it. Just wow!

Where did this traffic come from? itch offers two views of incoming traffic. ‘By domain’ groups all hits from a particular website together, I think this is a bit clearer for seeing overall site popularity. ‘By URL’ shows you where specifically they’re coming from on those websites, for example the different subdomains of Reddit, or the particular page on a blog (so you don’t have to go digging yourself). 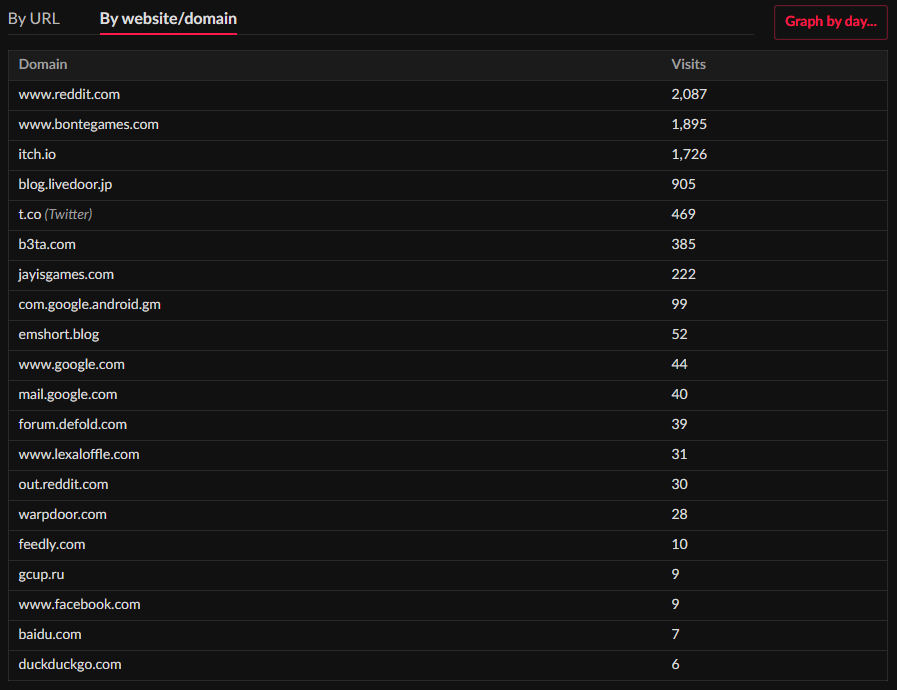 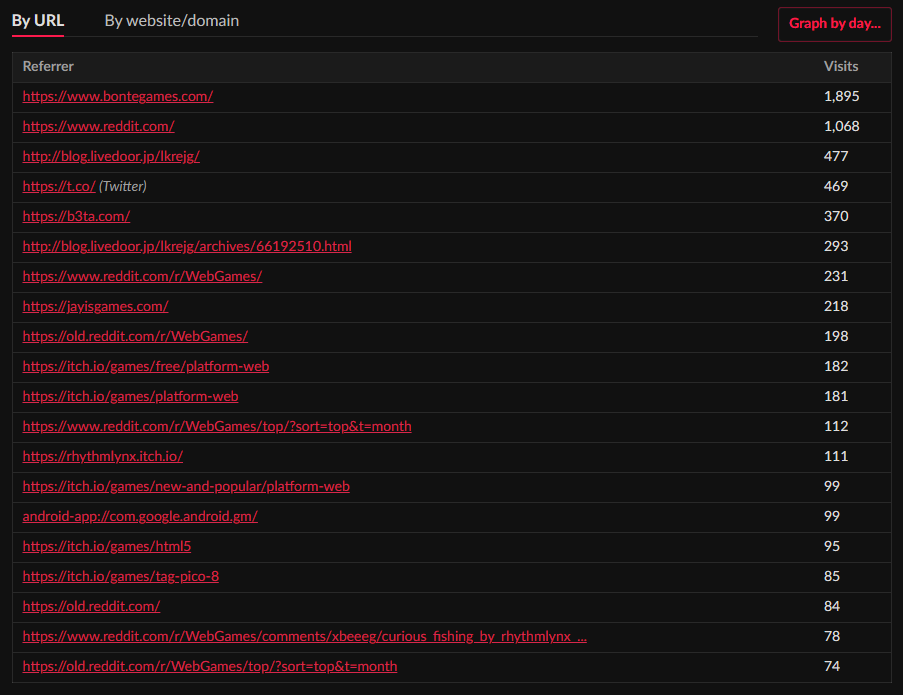 The vast majority of the page views came from a handful of websites which curate web games specifically, including one in Japanese! That was particularly heartwarming to see, reading Google-translated page comments of people enjoying the game and helping each other get past tricky levels, it really made the localization work feel worth it, this was the exact thing I was hoping to enable. In fact people were giving each other hints in the comments of various websites and it was always fantastic to see.

I wanted to end by including some of my favourite comments. It makes me very happy to know that people are really enjoying the game ❤ 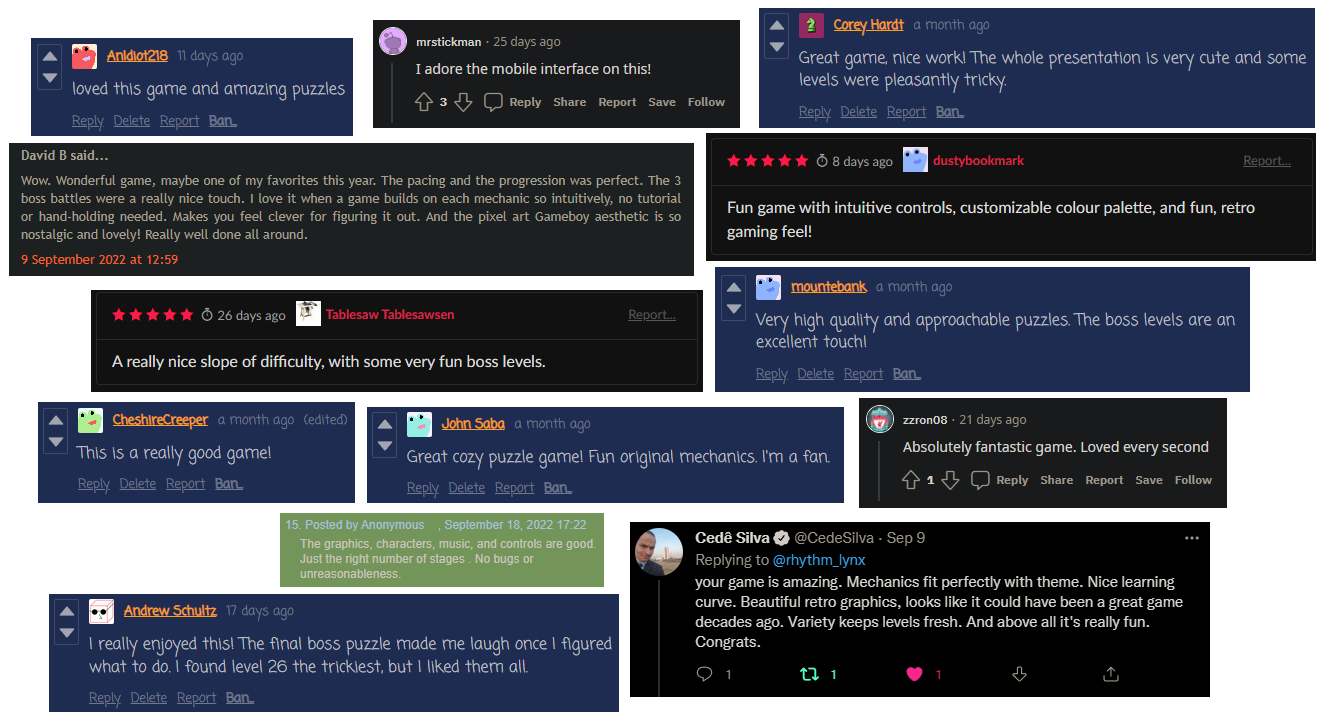 This addendum was originally written two weeks after the main post

A small addendum to the previous devlog:

Shortly after posting the devlog discussing how the launch went, Wholesome Games tweeted about Curious Fishing out of the blue, including their own GIF of gameplay! Even more incredibly, this led to a feature on PC Gamer! Woah!!! 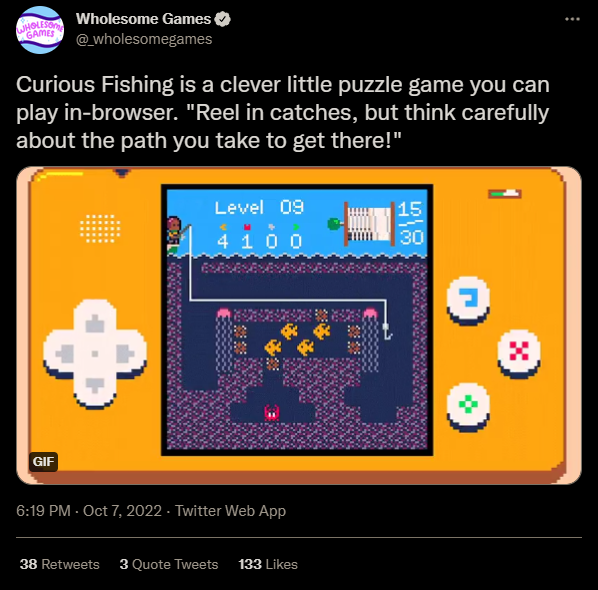 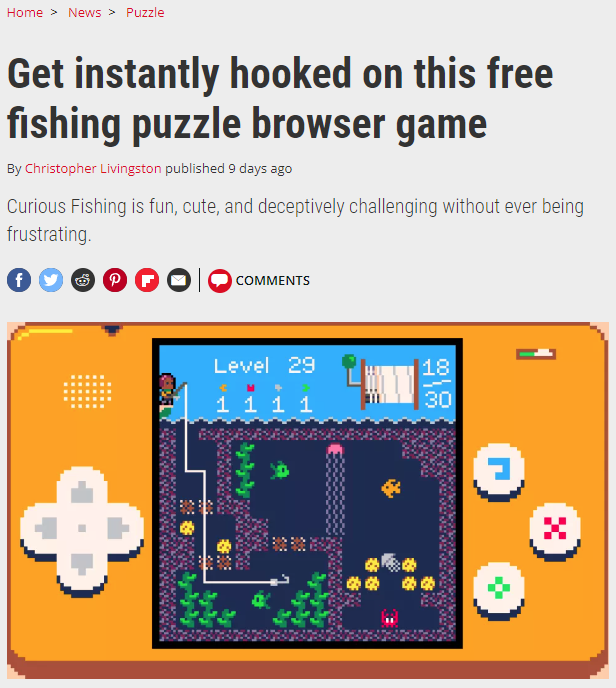 As you might imagine, this created a slight spike in the analytics. See if you can spot it: 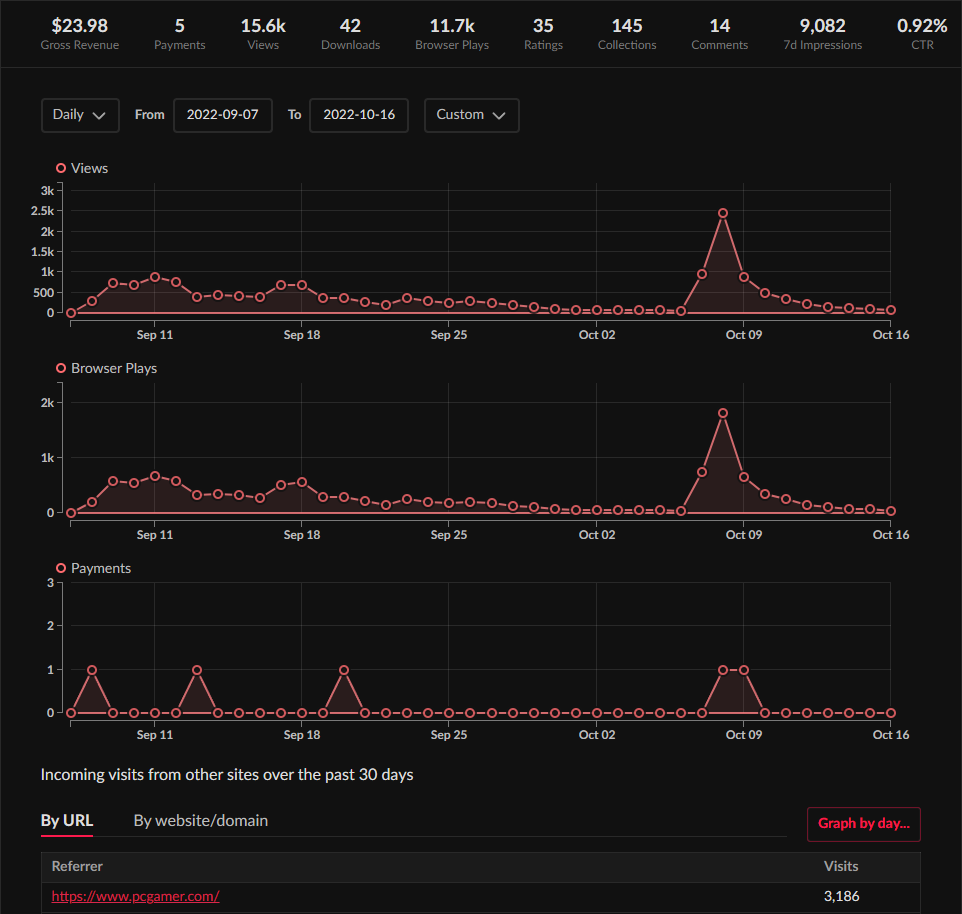 We’ve now had over 15 thousand page views and are approaching 12 thousand plays. That’s a very silly number if you try to actually imagine a crowd of people that size, knowing that that many people have played my video game. Wow.

Britzl has also very kindly added the game to the Defold showcase page, which is lovely.